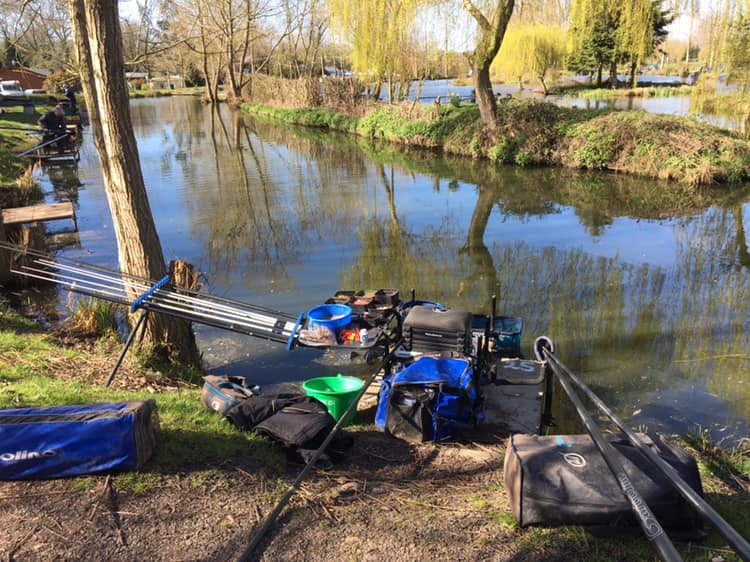 This week I travelled up to Tunnel Farm Barn for their Sunday open. With a good turnout of 36 anglers the match was spread over two pools, House and Canal

I really wanted to draw on House pool which luckily I did, drawing House 25 up at the top end of the pool. This didn’t really mean anything to me as I’m not a regular but talking to a local on the next peg he told me this area was probably only good enough for 80lb and if it fished hard we may be in with a chance of framing. The peg looked good though with plenty of options.

I set up rigs for across to the island and the margins plus mid water rigs for pellets and maggots. I decided to start on maggots on my top 2+2 line first and began catching F1’s straight away with the odd Skimmer, feeding plenty of maggots and groundbait slop. This continued for a couple of hours before the bites began to slow down. So at this point I began feeding a few 4mm hard pellets into the left hand margin and after 20 minutes I tried it. I caught an F1 here straight away with a 6mm expander pellet but I had problems with scum on the water surface. It was difficult to present my rig through it. I tried to clear this scum out with my cupping kit but this only worked for a few minutes before the scum would float back in. So I switched to the right hand margin which looked a little better with the surface scum but there were lots of twigs and leaves on the bottom. In the end I had to come a little away from the bank away from the scum but I found a little clear area to fish in. I caught some more F1’s here but my catch rate had slowed down with the 6mm soft expanders.

A change was needed, luckily I’d prepared some 6mm cubes of meat the night before, as an alternative bait. I’d heard some people were starting to catch on it the week before. So I tried this next kindering in a few loose offerings in with some 4mm pellets. I began to get bites but I was also bumping a few fish off and had to change to a lighter elastic, once I’d done this I didn’t bump any more off and the F1’s I was catching seemed to be a better stamp of fish.

For the rest of the match I pretty much stayed on this line catching F1’s well. I found they didn’t want much bait though and I just kindering in a few cubes every 10 minutes. This worked better than feeding on every put in. There were longer times waiting for a bite when I fed.

I continued to feed the maggot short line throughout this period in the margins, dropping on it several times to rest the margin line. I still caught well but the F1’s where a bit smaller here and I also caught the odd Skimmer. So this line became my secondary line when resting the margin.

That’s story of my match. There was no need to fish long to the island as I caught all my fish short or from the margins. At the start of the match I was told I would need 80lb to frame and this proved to be correct. I finished the match in 5th place with 88lb 6oz out of 36 anglers and picked up a section win.