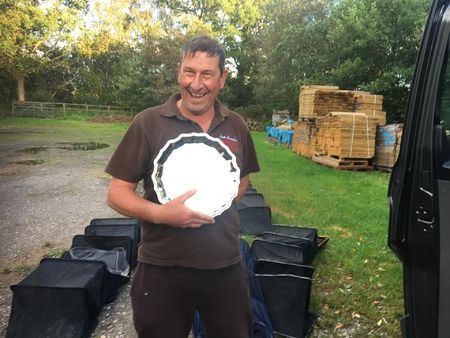 The Jubilee Nomads and guests fished Mark Birbeck’s, 3 day Somerset Leveller festival over a long weekend. Fishing Carey at Viaduct, Tile at The Sedges and Moor pool at Avalon fisheries.

The festival was run over 3 sections over the 3 days which always gives everybody a chance of doing well.  8 Tonne plus weight were recorded over the 3 days and the fishing was generally very good for most. The weather forecast wasn’t that good with heavy rain and wind forecast but we managed to avoid the worst of the weather and there was no wet tackle left in the cars this year.  As always the fishing and the banter back at the digs in the evening was excellent and we all had a good couple of evening meals down at the local pub.

Day Three, Moors pool, Avalon Fisheries. Going into the final day Graham Scott and Phil Seedhouse led the points table with 3 points each, closely followed by Rob Butcher on 4 points. So everything was to play for. Avalon fished really well with 5 tonne plus weights recorded. Rob Butcher claimed his 2nd win, this time with 178lb 11oz. 2nd was Robin Ballard with 131lb 0oz and 3rd was Mark Birbeck with 119lb 13oz. The other tonne plus weights came from Steve Foster 114lb 8oz and Andy Mitchell with 113lb 4oz. Also of note was Phil Seedhouse’s net of fish that weighed in at 78lb 4oz which included 54lb of Silvers. The final day section winners were Rob Butcher, Robin Ballard and Mark Birbeck. Wooden Spoon shared between James Gardner and Richard Walker.

After the match the points and weights were all worked out. This saw Rob Butcher and Phil Seedhouse tied on 5 points. Robs aggregate weight (379lb 6oz) was much higher than Phil’s (274lb 5oz) and he took the Silver Salver plate home this year, with Phil Seedhouse the runner up.  Robin Ballard and Graham Scott finished on 6 points so weight count back again came into play. Robins 327lb 6oz weight was greater than Grahams 185lb 9oz and Robin took 3rd overall place.   The dredged Overall Wooden spoon winner this year was…………………. Doug Smith finishing on 12 points. This was yet another well run and organised festival from Mark Birbeck. Despite the bad weather forecast prior to travelling down to Somerset we just about got anyway with it weather wise this year. Roll on the next time.

This was a Nomad match on the match pool, Campbell at Viaduct fishery down in Somerset. I’ve only fished this pool once before but I knew this pool has the potential to throw up big weights and definitely a match I’d been looking forward to on my trip down to Somerset for the Nomad Somerset spring festival.

At the draw, kindly done by the fishery management, as they know the pegs I drew strangely, being the only person to draw with a choice of two pegs, 118 or 119. This is because this area was the bottom area of the pool. So my heart sank. It must be a crap area if I was getting a choice of two pegs I thought!

On arrival 119 was right into the corner so I elected to fish 118 thinking if I was struggling I could still throw a bomb into the corner from 118. 119 looked the better peg to me. It had a nice bay to fish into on my left up against some brambles.

The plan was to start on the bomb with a banded 8mm pellet. while I primed up a long pole line with 6mm pellets, plus a short meat line. So I began on the bomb and pellet throwing around the peg for an hour but I had no pull rounds, even though the angler opposite had caught a few on the straight lead.

I tried the long pole line next with an 8mm hard pellet as hook bait and pinging in 6mm’s. This produced 4 or 5 carp in the next two hours but it wasn’t really producing enough and I was getting left behind in the match.

3 hours in and it was time for that nice margin up against the brambles. I’d fed a big pot of 8mm meat at the start of the match and topped it up with another pot an hour later. I was thinking it might be a bit to early in the year for 8mm meat but knowing this waters recent form on social media I thought the gamble was worth it if a big bag of fish was on the cards.

I waited 10 minutes for the first bite and then re fed via a kinder cup, very soon I was into my first margin munter, a carp round 4lb, quickly followed by a couple more carp around 3 to 4lb. This give me the confidence on this margin line and I stayed on this line for the rest of the match fishing 8mm cubes of meat. The Carp were a good size with a odd one going around 8-10lb in weight. One of these carp smashed my top kit while I was playing it. (something that has never happen to me in 20 plus years fishing but I still landed the carp with just 8 inches of top kit in my hand)

I had a good run of fish, kinder potting in 8mm cubes of meat after every fish but then the carp seemed to go 20 minutes before the end of the match. Then a caught a nice Tench around 3lb in the last 5 minutes to finish of the match.

On the all-out I had 96lb on my clicker plus a few silvers and I was hoping to have done the tonne and when at came to be weighed in I put 142lb 15oz on the scales!! (more clicker practise required) This was enough for 2nd in the match with 159lb winning the match.

So this was a nice days fishing, I’d been looking forward to fishing Viaduct all winter and it didn’t disappoint. I’ve now fished this pool twice and done two tonne plus weights. I’m back there in September and I can’t wait!! 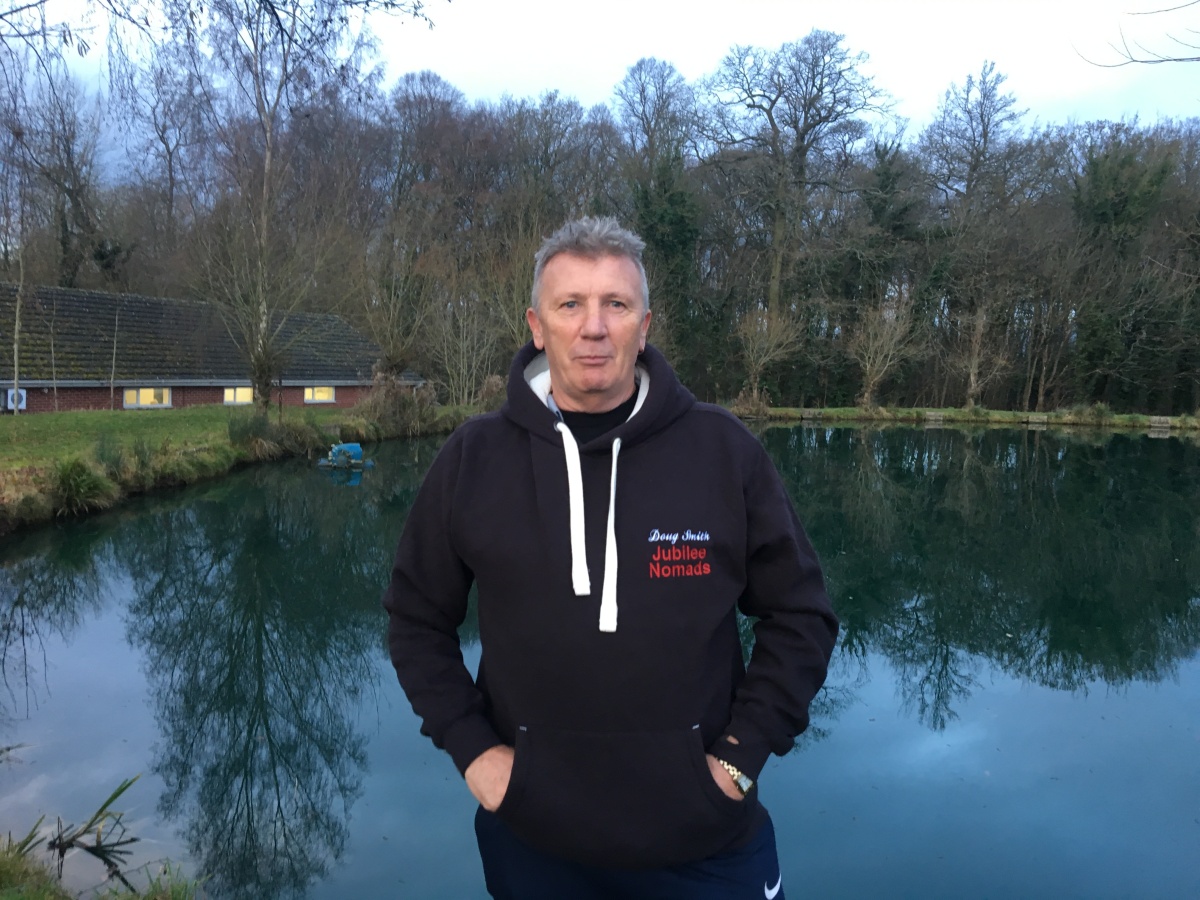 at three great venues for our, now annual Spring Festival with matches on the Campbell pool at Viaduct on day 1, The Tile pool at the Sedges on day 2 and then Tealham pool at Lands End Fishery on the final day.With mini sections of 3 or 4 over the 3 days, the result would always be close with all to play for on the last day.

Day 2 – The Sedges – Tile pool After a evening at the digs with plenty of banter and a few drinks day 2 saw us at the Sedges fishing the Tile pool. Stu Thomson was the starman winning the match at a canter placing a fantastic 182lb 3oz on the scales for the win. 2nd was Doug Smith with 107lb and 3rd was Jim Gurney with 87lb 12oz. But the important section winners were, Stu Thomson, Doug Smith and Graham Scott, Doug and Graham’s both 2nd section wins. Wooden Spoon winner was Andy Mitchell.

Day 3 – Lands End Fishery – Tealham poolThe final day saw us all check out of the digs and head down to Lands End Fishery to fish their main match pool, Tealham. with one match to go Graham Scott and Doug Smith were level on 2 points each, closely followed by Stu Thomson on 3 points and Phil Seedhouse, Andy Mitchell and Jim Gurney on 4 points. So all to play for!The match was won by Festival organiser, Mark Birbeck with 90lb 2oz, 2nd was Rob Butcher 86lb 12oz and 3rd was Doug Smith with 71lb 2oz.Wooden Spoon winner Jim Gurney. As we all packed up and loaded up the cars and vans for the long drive home, the overall placings needed to be worked out. Section winners for the final match were Mark Birbeck, Andy Mitchell and Rob Butcher. The final results saw Graham Scott and Doug Smith level on points and the title needed to go to weight count back… Doug Smith aggregate weight was 266lb 5oz to Graham Scott’s 259lb 4oz making Doug Smith 2019 Spring Festival Champion…………… and the one no one wants, overall Wooden Spoon winner, Oh well someone called Pete

Welcome to my website. I've had various websites over the years and this is the latest version, which is more suited to blogging, launched in May 2021 but many of my blogs stretch back to 2016. So if you've just stumbled across it and enjoyed reading the many blogs please help me continue posting about my fishing by helping out with my website hosting and domain costs. This is only a hobby fishing blogging website but I put the man hours in for free so any donation however small really helps me to continue with the website for all to enjoy.

Hillview Sunday open today, finally drawn canal 4 let’s hope their hungry!! #hillview #matchfishing
Hillview for the Sunday open today 3 canals and Moorhen in today. Drawn on 77 on canal 3. Bit rusty fishing these canals as haven’t drawn one for 12 months!
Back to the Sunday open at Hillview after last weeks win
Hillview Sunday open today on Moorhen and canal 1, drew Moorhen 15, clicked to 50lb in two nets, which went 50lb both weighs and 141lb total on clicker to weight in 141lb for the match WIN, sometimes it all goes right👍 #matchfishing #hillview
Back to Hillview for the Sunday open, over Moorhen and the 1st canal, drawn Moorhen 15 today but it’ll be hard to beat the 1st canal, just looking to win the pool #matchfishing #hillview #fishing
Change of scenery today, Hillview for the Saturday open over Moorhen and Heron, drew 19 on Moorhen and caught in spells for 72lb fishing 2nd in Section, enjoyed the day might go there tomorrow now #matchfishing #hillview #fishing #carp
Grant Davis Memorial cup match at the Jubilee fishery today, not been here for 12 months and it’s changed a lot, not like it was when I won it back in 2010 but just here for Grants family, drawn an ok peg so hope to get my hands back on the cup
Woodland View for the Sunday open split over High and Arles pools, drawn High 30. Deep on High so let’s hope they come Shall and short in the margins. High pressure today could be hard we’ll see
Manor Farm Leisure for the Wednesday open today. Des ship for company on the next peg and Neil McKinnon the next peg on the other side, can see I chip shopping today, hope not
My Tweets
Advertisements