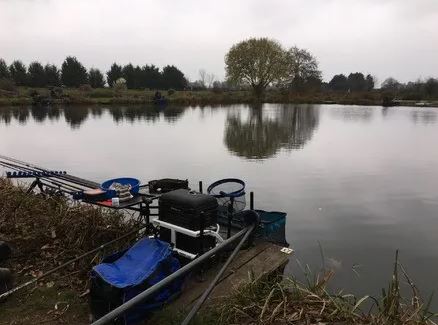 This match had 24 anglers fishing over Moorhen pool and Canals 3 and 4.

I drew on Moorhen 17 which has a island to fish to and this proved to be my main plan of attack. Hillview is a maggot dominated venue in the winter. So I set up a small 30g Preston ICS maggot feeder for throwing towards the island, two long pole lines for hard pellets and maggots plus two short lines for soft pellet and maggots.

At the start I cupped in some 4mm pellets into my long pellet line at 13 metres and began catapulting in a few maggots on the other long maggot line, while I started on the maggot feeder.

I began to get a few taps on the feeder after 10 minutes and I began catching small Chub and Skimmers. Then after 40 minutes I hooked into a Carp but I got snagged up by the island and lost it.  So I began casting a little more to the left away from the island, thinking there were a few snags right by the island.  I then caught a couple of F1’s and a few more small chub without getting snagged up. Things were going good and the other anglers around the pool weren’t catching!

I then went on to catch several more Carp and looking around the pool only the odd fish was being caught by the other anglers but things were beginning to slow down on the feeder. So I decided to throw a little nearer to me and in line with the island, thinking the fish had moved. This worked and I picked off a couple more carp before this slowed down.

So I throw to where I’d started the match and caught some more small Chub and Skimmers before the carp moved in and I caught a few more.  Things were going well and reckoned I’d got 50lb+ in the keepnets going into the last 2 hours.  But things were beginning to slow down.

I began the throw around to different areas looking for the fish but the bites had stopped. So I had to make a decision on what to do next.  All the time I’d been catching on the feeder I had constantly been feeding all four pole lines and I hadn’t tried them yet. They’d all had a good feed by now!

So I went on the long pole maggot line. I thought I’d give it a go but everybody else had been struggling on the pole so it was a gamble. but I hadn’t had a pole over these lines for the 3 hours I’d been feeding them, so I felt it was worth giving it a go for 15 minutes.

I didn’t have to wait long, I caught a carp after 5 minutes which gave me the confidence to stay on the pole a little longer and this produced another 4 carp in the next 40 minutes before this pole line died on me. So going into the last 40 minutes I went on my short 2+2 maggot line hoping to catch as I’d also been feeding this for 4 hours!! But no bites came and the anglers opposite were now catching fish.

So with 15 minutes left I threw out the maggot feeder out but it never pulled round.