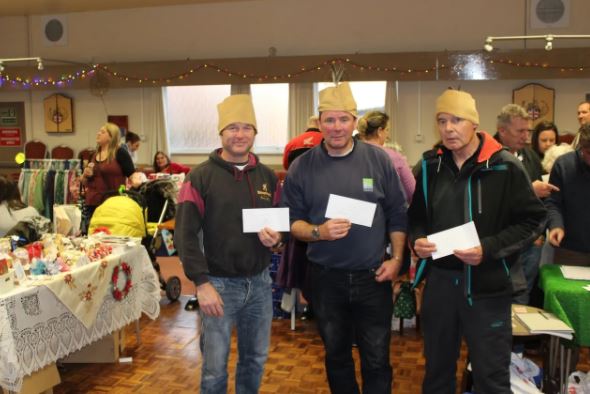 I drew on Jubilee pool peg 1 for this match and with plenty of open water and also after an overnight frost in the middle of December I thought fishing the bomb and bread would enable me to find a few fish somewhere in the peg.

So I started the match fishing the bomb with three 10mm bread discs on a 1.5 inch hair. The reason for the long hair is because bread swells up on the hair and also means you can use a bigger hook than normal for the time of the year. which was an B911 size 14 on a 50cm 0.16mm hook lenght. The diamater of line doesn’t matter as this is set up to catch carp. I throw this around the peg for the first 40 minutes looking for a carp while I was feeding three pole lines with maggots, looking for an early carp. I never had a bite on the bomb so I throw the rod up the bank and tried the pole.

I set up only two pole rigs. a winter carp rig at 13 metres straight out in front of me at 13 metres and a lighter rig if I struggled for bites.

The plan was to catch anything but I also knew that there are some bigger carp in this pool and with it only being a four hour matcn I thought that if I could catch at least a couple it would put me well up the section.

I began fishing where I’d been catapulting 10 maggots in every 10 minutes fishing a strung out rig with double red maggot hook bait. Bites were slow so I began spreading out the feed maggots over a larger area, hoping to draw in a carp. After 10 minutes doing this the float buried and five minutes later I landed a 10lb carp! This was a great bonus and I carried on doing the same, spreading out the feed maggots hoping to draw in another carp, but nothing happened. So I decided I would rest the swim because it was a bright sunny day and the depth of water was shallow. I thought maybe the fish didn’t want a pole over their heads. I continued to feed maggots but tried the margins left and right. If I was to catch a fish it would be a bonus but I felt the 13 metre line needed a rest.

I left the 13 metres line for 20 minutes and then tried it again and caught two more carp in 10 minutes! So maybe my thinking was right about the pole over the fishes heads was right. This was compounded by not having any other bites for 30 minutes after the last carp. So I rested the swim again and continued to feed maggots every 10 minutes and fished the margins for another 20 minutes. I did catch a small roach out of the margin but I really never fancied it and went back to the rested main 13 metre swim again.

There was about an hour left in the match now and not much had been caught and I felt I was doing OK. I decided a change to single maggot on the hook and changed to the lighter rig hoping a catch a few silvers just to build my weight up. I caught a couple of good skimmers and three roach on this rig. Then the float buried again and had my fourth carp on. It was a foul hooker and I lost is after a couple of minutes. This told me a few carp may be back in the swim and I changed back to the heavier rig with the bigger hook and gambled by upping the feed maggots and spreading them out as I fed. I was glad I did becasue 10 minutes later I caught my fourth a last carp!!

My total weight was 24lb 7oz. Which was 4 carp 2 skimmers and 3 roach which was enough to win the match where many of the other anglers fishing the match had struggled, which was probably because of the overnight frost, and the bright sunny conditions. So another good win where a bit of careful thinking was required to get the best from the peg.